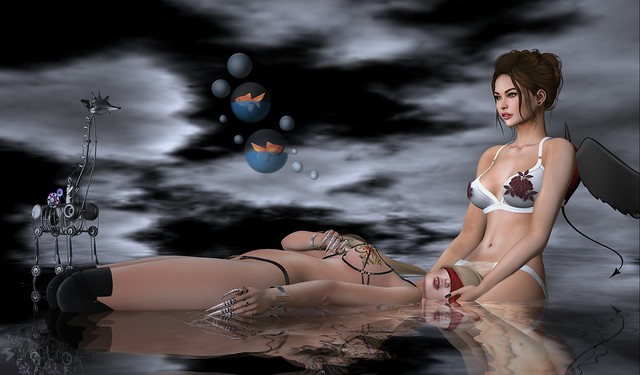 For those who may not know, Ophelia is a character in William Shakespeare’s play Hamlet. She is a young noblewoman of Denmark, the daughter of Polonius, sister of Laertes, and the potential wife of Prince Hamlet. Her character has become “immortalised” even more so because of the artistic portrayals of her final moments when she drowns in a brook. This was a scene which her mother, Queen Gertrude described as one in which Ophelia appeared “incapable of her own distress”.

Mind you in this scene we are both waiting for Ophelia (Alles) to recover from her ordeal … as she is not yet waving after almost drowning.

Tameless Saskia hair … made by Nita Bracken. I am wearing this hair in a tone from the Naturals pack (a bargain at 249 lindens). Purchased at the Hair Fair 2016 event, which will finish on July 31st. NEW.
Hair Fair 2016 – Backlot West

{NO EVIL} See~ crimson .::Cubic Cherry::. … made by Kreao Kujisawa. This is the red blindfold that I am wearing. Purchased at the ROMP event, which is open until July 29th. NEW.
Cubic Cherry at ROMP

+elua+ Abigail_Darkbrown pack hair … made by Miu Edman. Purchased at the current round of Uber, which is open from July 25th until August 23rd. NEW.
Uber

#EVANI-Emily bra WHITE … made by evastika Aura. Purchased at the current round of Uber, which is open from July 25th until August 23rd. NEW.
Uber

Pure Poison – Cute Devil Wings … made by Shaleene Kenin. The devil wings were available at The Nightmare event in October 2015.

We used two individual poses to make this scene. The pose that Alles used is __Amitie__ Bodyscapes-02 … made by BELEN Ackland. However I edited this pose using my Animare HUD (my left hand has been moved and my head slightly tilted) and the pose itself was used in a pose stand with a 30 degree tilt. On the other hand the pose that Siya used is shown here just how the pose maker intended it. Her pose is DM – Spent … made by Del May.
Amitié Poses – Bodyscapes Sets
Del May Mainstore