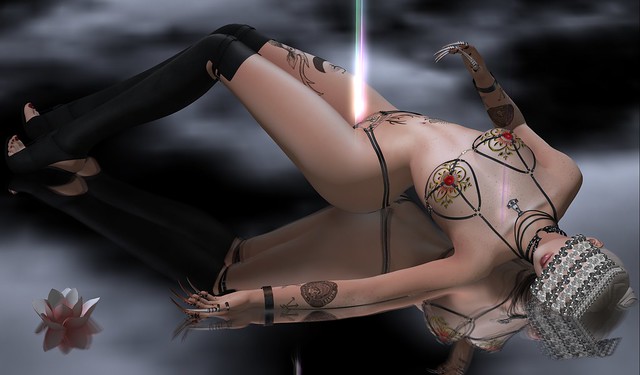 Alles is a HUGE fan of the American-Scottish alternative rock band called Garbage and I had a tune of theirs called “Subhuman” in mind when I doing this picture!! 😀

Burn down all your idols, destroy your idols
Create a scene
There goes all your reason, it’s helter skelter
It’s not a dream

Come down from the altar, remove your blindfold
What do you see?
Nothing left to do here, there’s nothing new here
It’s all the same

As for fashion details, groovy Alles is wearing the following:

no. 7 Sparkle Frames b/w diamonds … made by Shortcake Sugarplum.

Mithral * Oxygen UNRIGGED hair … made by Evadne Quintessa. I am wearing this short hair in a tone from the Blondes pack. Purchased at Hair Fair 2016, which is open until July 31st. NEW.
Hair Fair 2016 – Backlot Central

TABOU. Foxy Collar – Black-Silver … made by glamSOglamour Resident. Purchased at the ROMP event, which is open until July 29th. NEW.
TABOU at ROMP

.Reckless. – Nash (faded) tattoo – made by Landon Mode. I am wearing this unisex tattoo with Maitreya appliers. Purchased at the current round of The Mens Department, which is open until July 31st. NEW.
The Mens Department

The reclining pose that I have used is __Amitie__ Bodyscapes-06 … made by BELEN Ackland. I have modified the appearance of this pose by the use of my Animare HUD, with the position of my left and right arms being altered.
Amitié Poses – Bodyscapes Sets

One thought on “How Low Can I Go?”