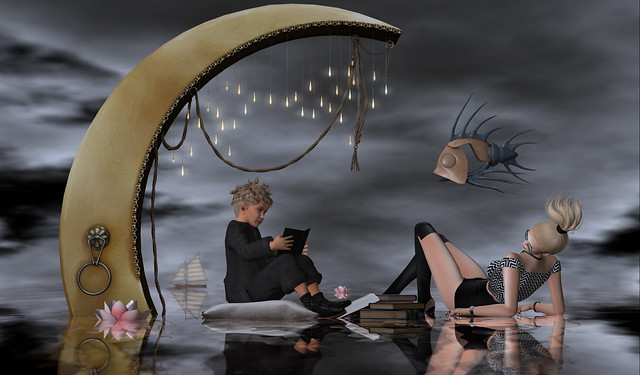 enVOGUE HAIR – Carley … made by Casandra Rain. I am wearing this updo in a tone from the Light Blondes pack. Purchased at Hair Fair 2016, which is open until July 31st. NEW.
Hair Fair 2016 – Backlot West

AF Ralph’s Boat … made by Apple Fall (aka warehousefifteendesigns Resident).
This cute object is Copy/Modify and was purchased on MarketPlace in March 2015 for a mere 125 lindens.
AF Ralphs Boat

floorplan. pile of books … made by Tegan Serin.

The pose that Alles used is AMITIE:: Vero 01 … made by susi Firanelli. Originally purchased at the Wayward Winter Market in January 2016, the two Vero pose sets are now available inworld at the Amitié Poses store.
Amitié Poses – Vero Sets