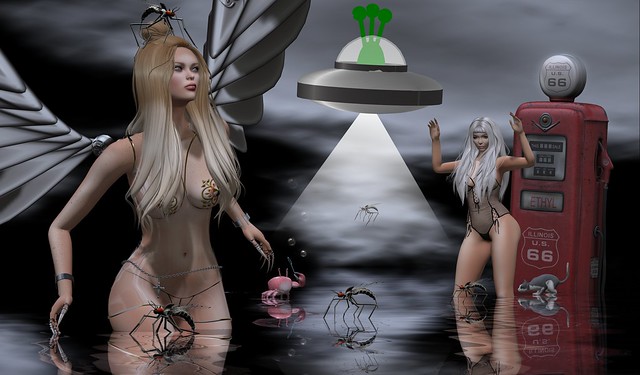 Amechan et moi both breathed a huge sigh of relief that the green alien in the flying saucer that was hovering just over our heads was far more interested in taking the mosquitoes on board than us!! Weren’t we lucky!! 😀

As for our fashion details, they are listed be

Tableau Vivant \\ Carrie (System/Lelutka/Catwa) [S] … made by M4ri1yn Magic. I am wearing this hair in a tone from the Ombre pack. Available now at Hair Fair 2016, which is open from July 16th until July 31st. NEW.
Hair Fair 2016 – Backlot North

AMECHAN – on the right with her arms aloft – is wearing the following:

We used two single poses to make this picture. The pose that super-scary Alles used is Ma Vie – Pure Heat 02 … made by Mavi Beck, while the pose that dear amechan used is Pose It-Fashion Pose 5 … made by Sirenity Soon.
Ma Vie Poses