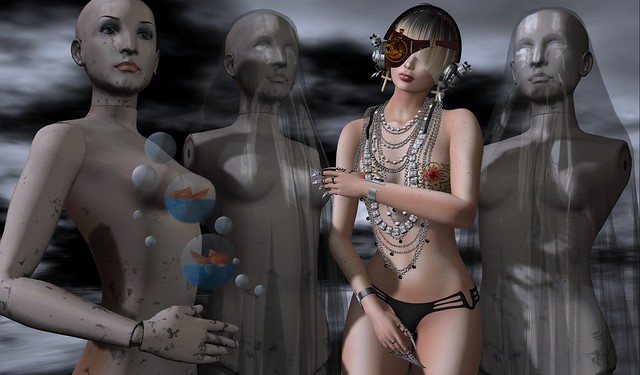 As for fashion details, the barely protected Alles is wearing the following:

AZOURY – Japet Magnifying Glass [Red] – Modif&Copy … made by Aniki Seetan. Available now at the latest round of the Men Only Monthly event, which is open from July 20th until August 15th. NEW.
Men Only Monthly

Foxes – Ibiza – Kini – Bottom- Lara – black … made by Tyr Rozenblum.
Purchased as the lower half of the Ibiza bikini at the June/July round of Collabor88. NEW.

RO – Spook Show – Fancy Nancy Mannequin … made by AxsisThorn Resident. Purchased as gacha items at the anniversary round of The Epiphany event, which is open until August 15th. NEW.
The Epiphany

RO – Spook Show – Gail Veil Mannequin x 2 … made by AxsisThorn Resident. Purchased as gacha items at the anniversary round of The Epiphany event, which is open until August 15th. NEW.
The Epiphany

And lastly, the pose that I have used is Amitie -The Pool – 08 … made by BELEN Ackland.