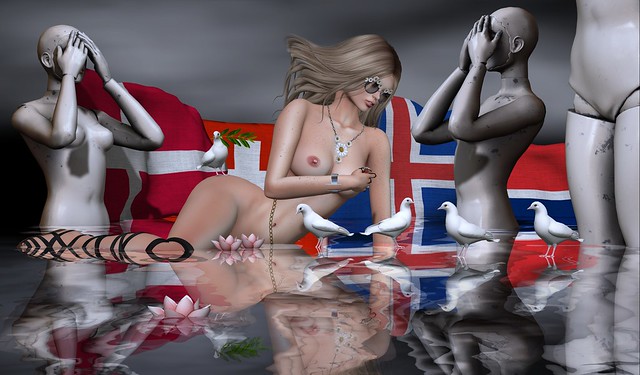 What’s so funny … about peace, love and understanding?

I think happiness helps to bring about peace and love and a lot of understanding, which is why I have included the flags of four European nations who have topped the rankings of the world’s happiest nations in a 2016 report – namely, Denmark, Switzerland, Iceland and Norway – in this picture.

MINA Hair – Neah (materials) … made by Mina Nakamura. I am wearing this hair in a tone from the Dark Blond pack. Available now at Hair Fair 2016, which is open from July 16th until July 31st. NEW.
Hair Fair 2016 – Backlot Central

Peace Dove (WEAR ME) R … made by JubJub Forder. Worn on my Right Hip.

RO – Spook Show – Val Vain Mannequin x 3 … made by AxsisThorn Resident. Purchased as gacha items at the anniversary round of The Epiphany event, which is open until August 15th. NEW.
The Epiphany

Peace Dove (FOR LAND) x 4 … made by JubJub Forder.

And lastly, the pose that I have used is Ma Vie. – Celestial 07 … made by Mavi Beck.