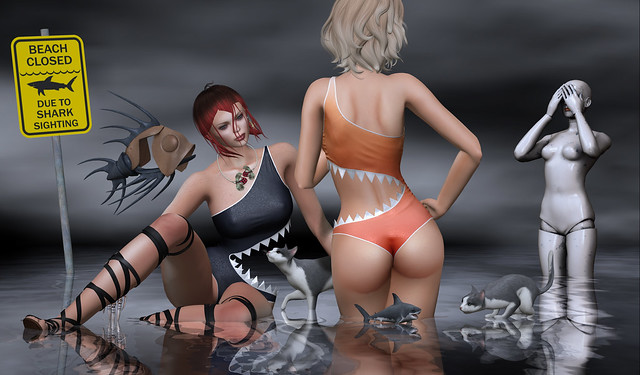 It’s just so much more “complicated” than wearing an ordinary bikini!! 😀

ALLES – seated, on the left – is wearing the following:

(Kunglers) Ida necklace – Silver ruby 1 … made by AvaGardner Kungler. Purchased at the On9 event in April 2016.

LARA – standing, on the right – is wearing the following:

TETRA – Sharkini (Orange) … made by NataPorolo Resident. The Sharkini made its debut at Summerfest ’16 but is now available on Second Life MarketPlace. NEW.
TETRA-Sharkini-Orange

RO – Spook Show – Val Vain Mannequin … made by AxsisThorn Resident. Purchased as a gacha item at the anniversary round of The Epiphany event, which is open until August 15th. NEW.
The Epiphany

One thought on “How to Wear A Sharkini”