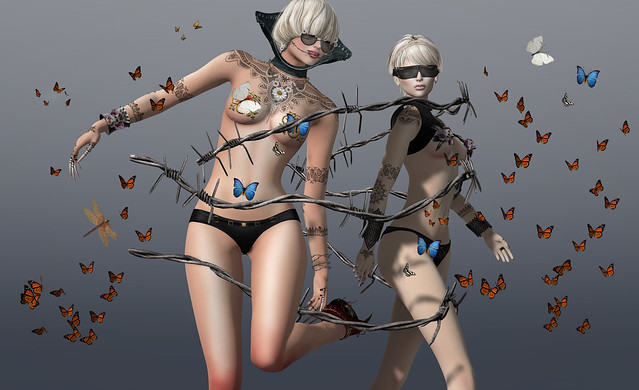 Did you know that there is a fully-fledged barbed wire museum in Texas? Well, neither did I until today … but I’m not sure that it will ever go onto my bucket list!! 😀

As for the fashion details for the two lovelies who have got themselves into a barbed wire situation – so to speak – they are listed below.

booN Lab.028 hair (Materials) … made by boo Nakamura. I am wearing this er, “bowl cut” styled hair in a blonde tone. This was purchased at the current round of the GEN-Neutral event, which is open from May 12th until June 2nd. NEW.
GEN-Neutral

Meva Collar for Cap … made by Mea Carnell.

Letis Tattoo : Ixchel : Maitreya … made by Leti Hax. I am wearing this tattoo at a 75% strength. Purchased at the opening round of the Ultra event, which is up and running from May 15th until June 15th. NEW.
Ultra

AZOURY – Neotropic Ballet Shoes for SLink PointeGold [Fiesta] … made by Aniki Seetan. Available now at the 2016 round of The Dark Style Fair, which is open from May 14th until June 4th. NEW.
The Dark Style Fair

And SHELLY – on the right is wearing:

Tableau Vivant \\ Luminay hair … made by M4ri1yn Magic. Shelly is wearing this hair in a tone from the Blonds pack. Available now at the current round of Collabor88, which is open from May 8th until June 6th. NEW.
Collabor88

Letis Tattoo : Ixchel : Maitreya … made by Leti Hax. Shelly is wearing this tattoo at a 75% strength. Available now at the opening round of the Ultra event, which is up and running from May 15th until June 15th. NEW.
Ultra