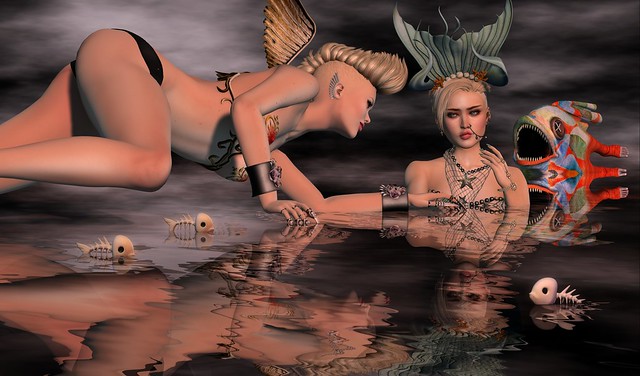 But hopefully I am the next best thing!! 😀

As for fashion details, they are as follows.

WREN – on the right – is wearing the following:

+Half-Deer+ Skellyfish Only (rezzed) x 3 … made by Halogen Magic.

*DOLLCOCO*_FishSarrouel(snow)_Abstract-Orange … made by cocoro Lemon.

Alles and Wren both used single person poses for this shoot, although as I had loaded them into a pose stand I was able to move us close together so that it appeared as though we were touching hand-to-hand. This does make it look as though we were using a two-person pose setup. The “diving” pose that Alles used is Amitie -Dreams- No … made by BELEN Ackland, while the pose that Wren used is KwK.poses -attitude- 003 … made by kiana Jarman.

One thought on “You’re Not Captain Awesome”