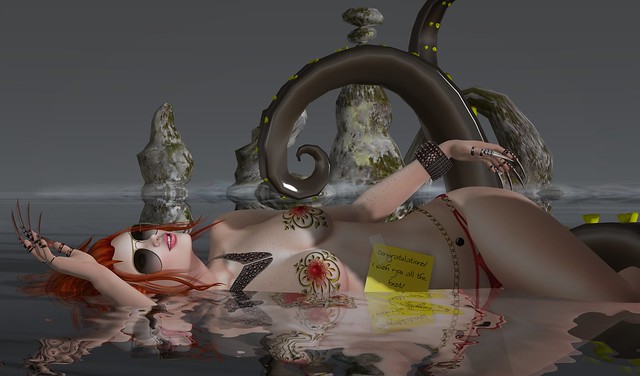 He/she is back again and still wants to caress me with their tentacles!! Eeek!!

MINA Hair – Irma … made by Mina Nakamura. I am wearing this hair in a dark red tone. The Irma hair will be available at The Gacha Garden which opens on May 1st. NEW.
More information on The Gacha Garden here:
http://www.thegachagarden.com/

StrawberrySingh.com – Indira Shape S Standard Size … made by Strawberry Singh. Modified a bit by me – the hands are now set at 10, my shoulders are set at 50, cleavage is 85 and my hip width is now 65. Purchased on MarketPlace in July 2015.

Meva Indrya Collar rose … made by Mea Carnell. Available now at the current round of Shiny Shabby, which is open from April 20th until May 15th. NEW.
Shiny Shabby – Meva

Meva Indrya Bangle rose left … made by Mea Carnell.
Available now at the current round of Shiny Shabby, which is open from April 20th until May 15th. NEW.
Shiny Shabby – Meva

[ Lucky #7 ] Post-Me: congratulations! … made by Shortcake Sugarplum. Purchased as part of set of Post-Me notes – which can either be rezzed or worn on your body – on Second Life MarketPlace. Available here:
Post Me Notes

fame femme : Orchid BellyChain – Black – Unrigged … made by Clarysa Damiano. Purchased as part of a gold set at the Spring round of SaNaRae which is open from April 25th until May 18th. NEW.
SaNaRae

The prop that I have used is baby Kraken in a barrel … made by minnie Tunwarm.

The pose that I have used is … Bauhaus Movement – Manga Stream 21 made by LouLou Teichmann. However this pose has been loaded into a pose stand and the pose stand was then tilted at about 45 degrees.