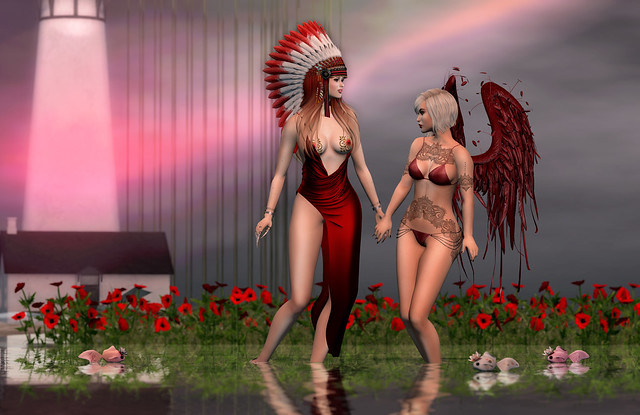 ‘Tis a rendezvous in a far-off SIM, in which Alles met up with an angel in red!! 😀

*COCO*_FeatherHeaddress(Red)_Mod … made by cocoro Lemon. Purchased at the FaMESHed event in June 2015 – but is most likely unavailable now.

enVOGUE HAIR – Siane Fitted … made by Casandra Rain. I am wearing this hair in a tone from the Ombre pack. Purchased at the Black Fashion Fair in April 2016 – the event is open until April 29th, so be quick. NEW.
Black Fashion Fair

StrawberrySingh.com – Indira Shape S Standard Size … made by Strawberry Singh. Modified a bit by me – the hands are now set at 10, my shoulders are set at 50 and my hip width is now 65. Purchased on MarketPlace in July 2015.

RAVENWINGS – on the right – is wearing the following:

Blueberry – Oakley Wings – Red … made by Blueberryxx Resident. This is a common item on a gacha at the latest round of The Epiphany event. NEW.

Blueberry – Oakley – Rare – Maitreya – Red Panties … made by Blueberryxx Resident. This is a RARE gacha item at the latest round of The Epiphany event. NEW.

The two-person pose that we used is Glamrus . Golden Angels … made by GlamRus Resident.