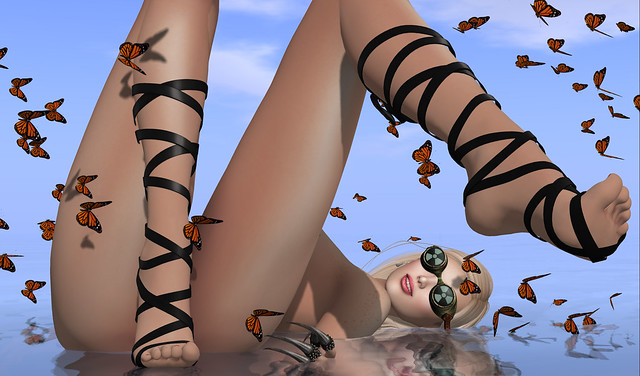 To fly anywhere that they want to, of course!! 😀

.Entwined. Alison hair … made by VivienMarli Resident. I am wearing this hair in a tone from the Light Blondes pack. Available now at the current round of the Shiny Shabby event, which is open through until April 15th. NEW.

.{PSYCHO:Byts}. Apocalyptic Goggles – Eyes … made by psikotik Gothly. Purchased at The End event in July 2015.

fri. – Reverie.Wraps (Coal) – Maitreya … made by Darling Monday. These were available at the Ethereal round of the Uber event, which finished on March 23rd. NEW.

The sole prop in this image is Persefona All in Butterflies -move- (orange) … made by Persefona Resident. Purchased at the current round of the Cosmopolitan event which is open from March 28th until April 9th. NEW.
Cosmopolitan

The pose that I have used is Pose It-On the Floor … made by Sirenity Soon. NEW.
Available here: Pose It Main Store (Pose 14 of 14)