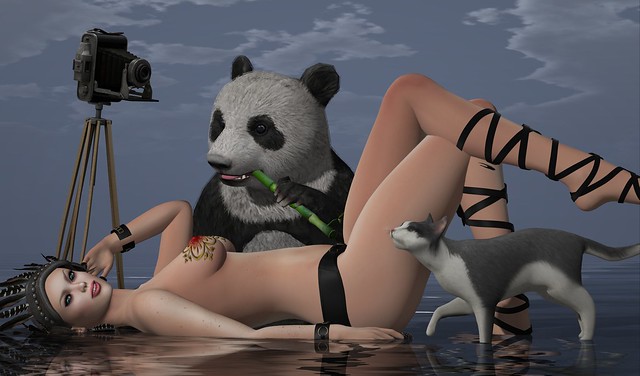 Meva Feather Headpiece Black … made by Mea Carnell. Available now at the latest round of We Love Role-Play, which is open through until March 31st. NEW.

erratic / eunice – bikini bottom / black (maitreya) … made by Erratic Rain. Purchased at the Espionage-themed round of Collabor88, which finished on March 6th. NEW.

fri. – Reverie.Wraps (Coal) – Maitreya … made by Darling Monday. Available now at the current Ethereal round of the Uber event, which finishes on March 23rd. NEW.
Uber

AF Vintage Camera w/ Tripod … made by the amazingly talented Apple Fall (aka warehousefifteendesigns Resident). This was purchased at the June 2014 round of The Arcade Gacha but you may be able to find a copy on Second Life MarketPlace.

Mutresse-Panda Bamboo-Bear Cubs … made by Eeky Cioc. I have enlarged this item via the Edit tools. The Mutresse Bear Cubs collection is available now at the March 2016 round of The Arcade Gacha but Alles purchased her copy at the Seraphim Yardsale. NEW.
Seraphim Yardsale

(fd) Cat – 12 Curious … made by Toast Bard. This super cute virtual animal was purchased at the September 2014 round of The Arcade Gacha but you might be able to find a copy on Second Life MarketPlace.

The pose that I have used is Pose It-Cat Woman Scratch … made by Sirenity Soon. This pose is part of a set that will be available at the March 2016 round of the On9 event. NEW.