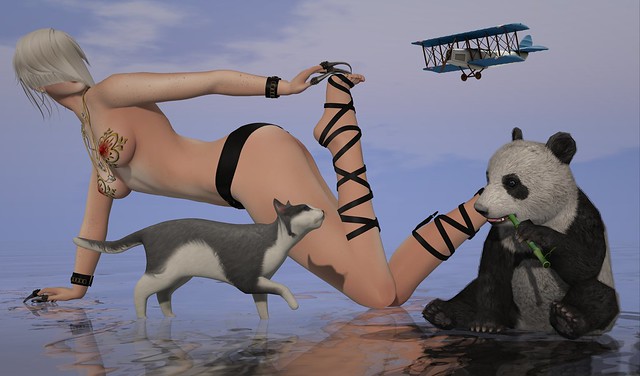 Can I be direct and honest? I just love these new claws from Meva cos they help me to scratch all of those itchy parts of my virtual body!! Hehe!! 😀

As for my remaining fashion details, Alles is wearing the following:

.Shi : Introvert [Unisex . Mono] hair … made by Joy Laperriere. Purchased at the current round of KUSTOM9, which will finish on March 10th. NEW.
KUSTOM9

LaGyo_Alicia necklaces set / Front – Gold … made by Gyorgyna Larnia. Purchased at the March 2016 round of FaMESHed, which finishes on March 27th. NEW.
FaMESHed

erratic / eunice – bikini bottom / black (maitreya) … made by Erratic Rain. Purchased at the Espionage-themed round of Collabor88, which finished on March 6th. NEW.

fri. – Reverie.Wraps (Coal) – Maitreya … made by Darling Monday. Available now at the current Ethereal round of the Uber event, which finishes on March 23rd. NEW.
Uber

AF Model Plane … made by the amazingly talented Apple Fall (aka warehousefifteendesigns Resident). I have removed the strings that were once attached to the plane (it was intended to hang from a ceiling). Purchased at the March 2014 round of Collabor88 but sadly no longer available.

The pose that I have used is Pose It-Cat Woman Scratch … made by Sirenity Soon. This pose is part of a set that will be available at the March 2016 round of the On9 event. NEW.