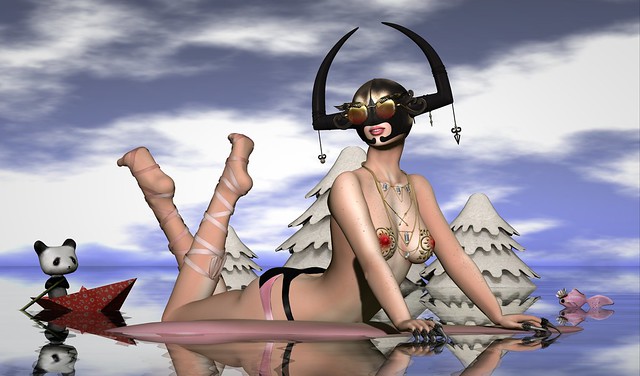 I’m not quite as voracious as a grey seal but hopefully I am a little wiser!! 😀

As for fashion details, young pinkie aka Alles, is wearing the following:

AZOURY – Agushaya Headwear [Copper] … made by Aniki Seetan. Available now at the latest round of We Love Role-Play, which is open from March 4th through until March 31st. NEW.
We Love Role-Play

Pure Poison – Ether Sunglasses … made by Shaleene Kenin. These delightful sunglasses are available at the current Ethereal round of the Uber event, which finishes on March 23rd. NEW.
Uber

LaGyo_Alicia necklaces set / Front – Gold … made by Gyorgyna Larnia. Purchased at the March 2016 round of FaMESHed, which finishes on March 27th. NEW.
FaMESHed

fri. – Reverie.Wraps (Blush) – Maitreya … made by Darling Monday. Available now at the current Ethereal round of the Uber event, which finishes on March 23rd. NEW.
Uber

*AF* Paper Tree Trio … made by ArtizanMesh Resident. Purchased at the December 2015 round of We Love Role-Play.

The pose that I have used is double take: sunscreen … made by Valena Vacano. This pose is part of the double take: down and out 2 set which was a Fifty Linden Friday item on January 29th, 2016.
Available here: double take