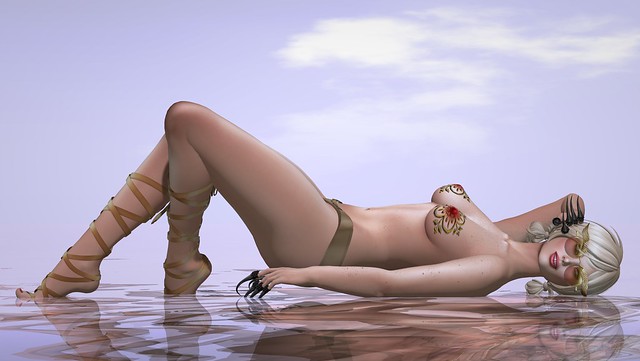 Which is no doubt much better than a Mexican standoff … si?

As for my worn bits, Alles is wearing the following:

Tableau Vivant \\ Myu hair … made by made by M4ri1yn Magic. I am wearing this hair in a Blonds tone. This is one of two new hairs from Tableau Vivant that are available at the March 2016 round of The Arcade Gacha. NEW.

Pure Poison – Ether Sunglasses … made by Shaleene Kenin. These delightful sunglasses are available at the current Ethereal round of the Uber event, which finishes on March 23rd. NEW.
Uber

erratic / eunice – bikini bottom / gold (maitreya) … made by Erratic Rain. Purchased at the current Espionage-themed round of Collabor88, which finishes on March 6th. NEW.
Collabor88

fri. – Reverie.Wraps (Gold) – Maitreya … made by Darling Monday. Available now at the current Ethereal round of the Uber event, which finishes on March 23rd. NEW.
Uber

The pose that I have used is double take: indian summer … made by Valena Vacano. This pose was part of the double take: down and out 3 for flf set which was a Fifty Linden Friday item on February 27th, 2016. NEW.
Available here: double take