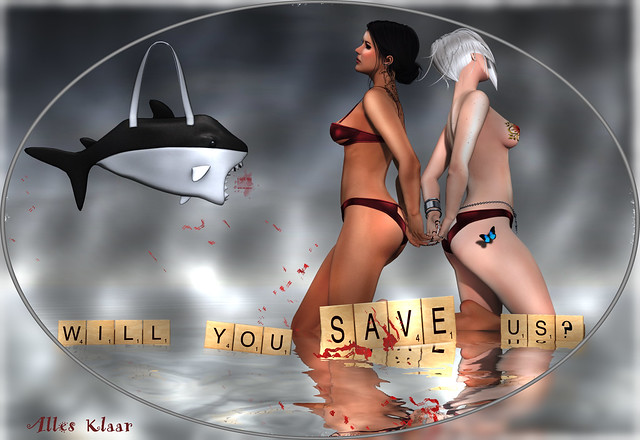 Who indeed? As for our styling details, they are below.

ELO – on the left – is wearing the following:

.Shi : Introvert [Unisex . Mono] hair … made by Joy Laperriere. Purchased at the current round of KUSTOM9, which is open from February 15th until March 10th. NEW.
KUSTOM9

.:KosmO:. Simply on your wrist – silver … made by Siemgirl Karsin.
KosmO @ MarketPlace – Simply On Your Wrist

AZOURY – Pure Papillon ( Blue) … made by Aniki Seetan. Whilst it is designed as a mouth attachment, I’m wearing it on my right hip. Available here:
Pure Butterfly Blue

Both Elo et moi used the same pose – although as it was loaded into a pose stand, I was able to have us facing away from each other. The pose is Bauhaus Movement – Chocolat/Anime 09 … made by LouLou Teichmann. This pose is one of the many excellent poses that are in the Bauhaus Movement – Chocolat/Anime Female Poses set that is available now at the current round of The Liaison Collaborative, which is open until February 28th. NEW.
The Liaison Collaborative