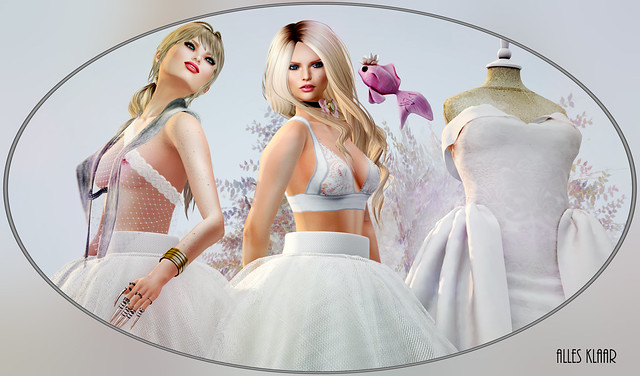 Elysium – Elvira head crown – white gold … made by Aleida Rhode. Purchased at the current round of We Love Role-Play, which is open from February 4th through until February 29th. NEW.
We Love Role-Play

MINA Hair – Helen (materials) … made by Mina Nakamura. This hair will be available at the February 2016 round of Hairology, which begins on February 10th. NEW.
Hairology

StrawberrySingh.com – Pretty Shape XXS … made by Strawberry Singh. The shape has been modified by me – as I am taller, the hands are now set at 10, my shoulders are set at 54 and hip width is now 58. Purchased on MarketPlace in August 2014.

MISCHA – on the right – is wearing the following:

LeLutka.Mesh Head-STELLA v1.3 … made by JadenArt Resident.
LeLutka Head (with eyes) ALPHA … made by Nyx Linden.

The in situ props are:

AF Dress Form w/ Dress 2 … made by made by Apple Fall (aka warehousefifteendesigns Resident).

The other prop is +Half-Deer+ Flowerhead Goldfish – Love – Rez (S) … made by Halogen Magic.

The two-person pose that we used is KaTink – By My Side … made by AnneMarit Jarvinen. This is actually a pose for a female/male couple but it has been edited by me to make it work for two femmes.
KaTink Poses & More