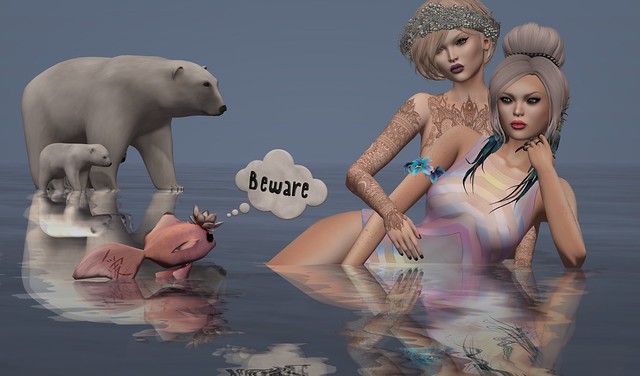 Unless, of course, if this cute lil’ Half-Deer goldfish is like the bloodthirsty rabbit in Monty Python and The Holy Grail but somehow I don’t think so!! 😀

As for our fashion detais, they are below.

ALLES – at the front – is wearing the following:

enVOGUE HAIR – Jessica … made by Casandra Rain. I am wearing this hair in a tone from the Light Greys pack. Available here:
enVOGUE Hair

Zaara : Sarika feather earrings (default/lelutka) L *azure* … by Zaara Kohime.
Zaara : Sarika feather earrings (default/lelutka) R *azure* … by Zaara Kohime.
Purchased as a set at the current round of the Collabor88 event, which is open from January 8th until February 6th. NEW.
Collabor88

erratic / mirari – bodysuit / holo (maitreya) … made by Erratic Rain. Purchased at the current round of Collabor88, which is open from January 8th until February 6th. NEW.
Collabor88

SHELLY – at the rear – is wearing the following:

Bauahus Movement – Vanleen Snow HEAD / CELESTE Resize … made by LouLou Teichmann. Available now part of a set at the current round of The Seasons Story, which is open from January 10th through until January 31st. NEW.
The Seasons Story

ISPACHI [CHERISHED MOMENTS] Polar Bears … made by Andred Qinan. This item was purchased at the December 2014 round of The Arcade Gacha. Sadly, ISPACHI is no longer active in Second Life.