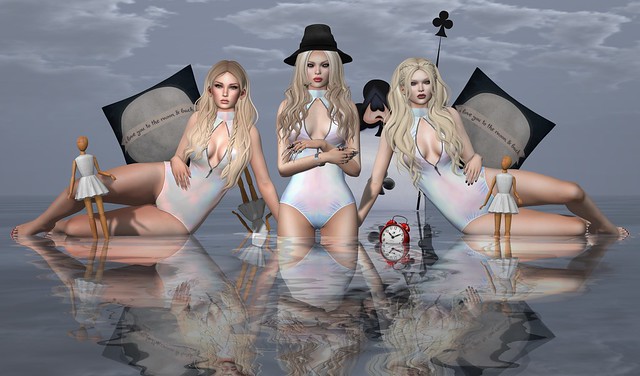 But at least the memories will last.

Elemiah, Alles and Shelly are all wearing the new Addams // Lupe Disco Body // Maitreya outfit that is available now at the current round of Collabor88. And these are our individual styles.

/Wasabi Pills/ Ocean Mesh Hair [Blonds] … made by MissAllSunday Lemon. Available now at the January 2016 round of Hairology. NEW.
Hairology

ALLES – in the middle – is wearing the following:

Tableau Vivant \\ Slouchy hair [L] … made by M4ri1yn Magic. I am wearing this hair in a tone from the Blonds pack. Available at the latest round of KUSTOM9, which begins on January 15th and is open through until February 10th. NEW.
KUSTOM9

Addams // Lupe Disco Body // Maitreya … made by AmaliaRainwood Resident. I am wearing the bodysuit in the

SHELLY – on the right is wearing:

For this photo-shoot we used three individual poses that had been loaded into pose stands. The pose stands were then moved next to each other so it look like were are actually in a three-person pose. Each of the poses is from Lalochezia Poses and are made by Adeline Blackthorne. The individual poses that we used are:
Elemiah … -L- About A Girl 4
Alles … Look 2
Shelly … -L- About A Girl 4m
Lalochezia Poses