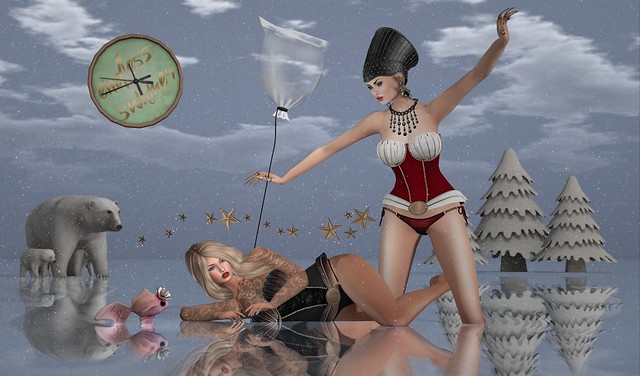 It may well be winter in Second Life but for those of us Down Under it’s summer time, with evenings spent lying by the pool sipping gin and tonic. Well, if only!! 😀

As for our fashion details, us two Aussie are decked out in sexy finery from Salt & Pepper and not much else!

Ðєє (sweetoz Resident) – on the left – is wearing the following:

[White~Widow] Whiplash…..thats all and the undies r just the ones that come with maitreya

S&P Corsage Alina maitreya exp … made by xxSaltandPepperxx Resident. The Alina corsage is available at a discounted price all through January 2016 as part of the MIX event.
Salt & Pepper

Meva Estyn Cap Black … made by Mea Carnell. Purchased at the December 2015 round of We Love Role-Play. NEW.

Meva Estyn Necklace Black … made by Mea Carnell. Purchased at the December 2015 round of We Love Role-Play. NEW.

S&P Corsage Alina maitreya exp … made by xxSaltandPepperxx Resident. The Alina corsage is available at a discounted price all through January 2016 as part of the MIX event.
Salt & Pepper

{theosophy} California Clock (Endless) … made by made by Trace Osterham. This was purchased at Summerfest ’15 and is unavailable now.

*AF* Paper Tree Trio … made by ArtizanMesh Resident. Purchased at the December 2015 round of We Love RolePlay. NEW.

ISPACHI [CHERISHED MOMENTS] Polar Bears … made by Andred Qinan. This item was purchased at the December 2014 round of The Arcade Gacha. Sadly, ISPACHI is no longer active in Second Life.

NB: The pose that Ðєє is using is called Bauhaus Movement – Shiina … and is made by LouLou Teichmann. I purchased this pose in October 2015 as part of a Bauahus Movement – Female Poses – TLC OCT 2015 FATPACK. Currently Bauhaus Movement in collaboration with an lar [poses] are having a Year End sale from December 31st, 2015 through until January 4th, 2016.