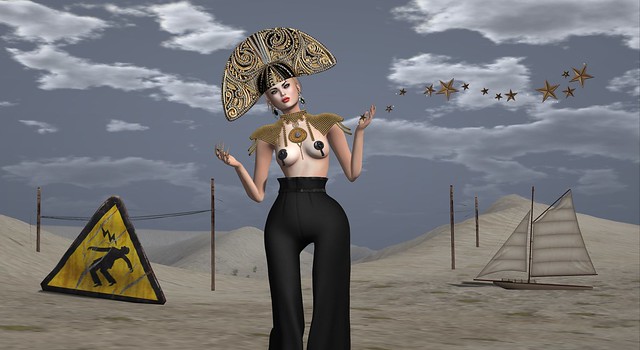 And I recall that fall
I was working for the government
And in a bathroom stall off the National Mall
How we kissed so sweetly
How could I refuse a favor or two
For a trist in the greenery
I gave you documents and microfilm, too.

!:Lybra:! Valeara headdress … made by Natzuka Miliandrovic. This is available for purchase on the TFC Hunt, which began on December 22nd. NEW.
The Fantasy Collective Hunt – Details

[The Forge] Pearl Collar (Gold) … made by Deccan Arida. Purchased at Project Limited in July 2015 but it is still available (in limited quantities) inworld.
The Forge & EZ Weaponry

Meva Skull Nipple Cover … made by Mea Carnell. Purchased at the previous round of the Shiny Shabby event, which finished on December 15th, 2015. NEW.

AF Ralph’s Boat … made by Apple Fall (aka warehousefifteendesigns Resident). This cute object is Copy/Modify and was purchased on MarketPlace in March 2015 for a mere 125 lindens.
AF Ralphs Boat

The pose that I have used is [X] Akane 1 … made by Xerys Resident.