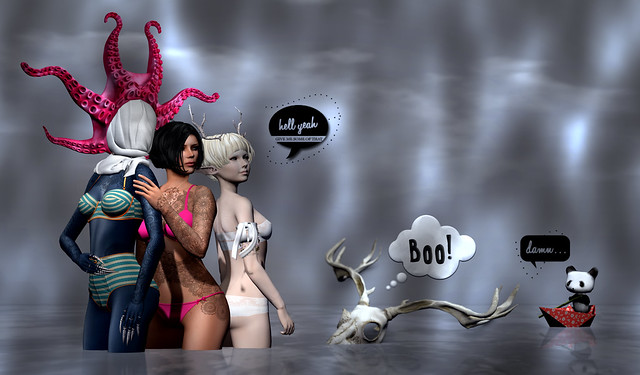 Or “juste nous trois” if you want a sexier title au français !! 😀

* SORGO – Faceless Drape B (FITTED) … made by Arscene Dubrovna. Purchased at the August 2015 round of The Men’s Department.

Lumae :: Niska – Aegean :: Dotted Brow / Eyeliner skin … made by Lumiya Rae. Purchased at current round of We Love Role-Play which finishes on November 30th. NEW.
We Love Role-Play

StrawberrySingh.com – Pretty Shape XXS … made by Strawberry Singh. The shape has been modified a bit by me – the hands are now set at 10, my shoulders are set at 45 and my hip width is now 80. Purchased on MarketPlace in August 2014.

RAINBOW – on the right – is wearing the following: