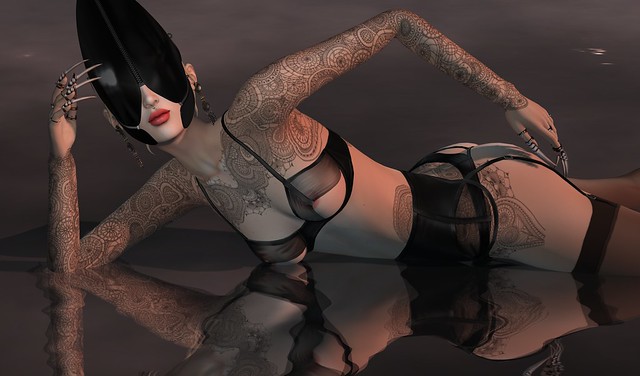 Now everybody have you heard
If you’re in the game, then the stroke’s the word
Don’t take no rhythm, don’t take no style
Got a thirst for killin’, grab your vial and …

Whilst waiting for her stroke, Alles is wearing the following items:

AZOURY – Sorrow Headwear (Timeless Black) 1 … made by Aniki Seetan. Available now at the current round of We Love Role-Play which finishes on November 30th. NEW.
We Love Role-Play

The pose that I used is Ma Vie – Pure Heat 07 … made by Mavi Beck. However I loaded all of the poses from the Pure Heat set into a pose stand and then tilted that stand at almost 90 degrees, so I was lying down on the water surface.