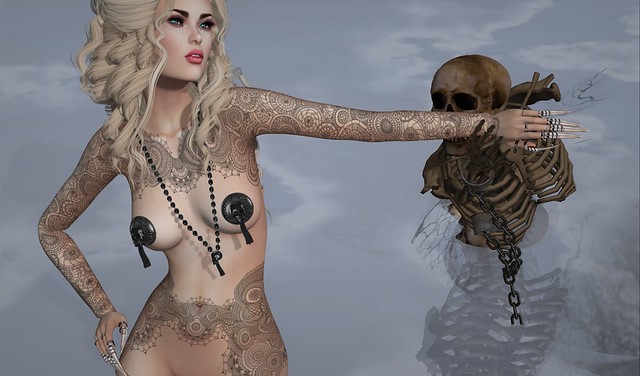 Cos you give me a headache!! 😀

Madame Julie from White Widow has a gorgeous new tattoo out called Deadman, which is available now at the latest round of Shiny Shabby – and after spending three weeks in a country where tattoos just couldn't be seen, Alles was thrilled to be able to show and wear some inked flesh in our virtual world once again.

Tableau Vivant \\ Eliza hair … made by made by M4ri1yn Magic.

[White~Widow – NORMAL] DeadMan – Black … made by Julie Hastings. I am wearing this tattoo with a Maitreya applier. NEW.

Meva Skull Necklace women 1 … made by Mea Carnell. Purchased at the latest round of the Shiny Shabby event, which is open from November 20th through until December 15th. NEW.

Meva Skull Nipple Cover … made by Mea Carnell. Purchased at the latest round of the Shiny Shabby event, which is open from November 20th until December 15th. NEW.

One thought on “Not Tonight, Darling”