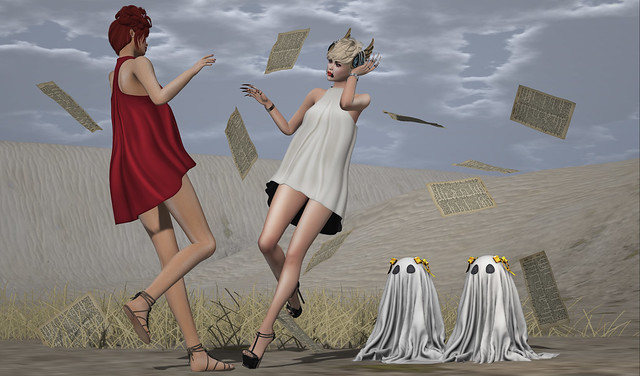 Well of course she is, cos I asked Julie if she wanted to be in a picture avec moi in the new Desi Cocktail Dress from GizzA Creations and she kinda leapt at the chance!! 😀

We did this picture at the Cape of Ruin SIM which is a desert environment – as you can tell – with sand dunes and dry grass and er, ghosts too – hehe!! 😀

As for our fashion details they are listed below.

JULIE – on the left – is wearing the following:

Caboodle – Large Winged Headpiece – Blue Rose … made by Ficceh Resident. The winged headpiece is available in four different colours (or as a FatPack) at the current round of The Fantasy Collective event, which is open from October 22nd until November 15th. NEW.
The Fantasy Collective

One thought on “You’re Wearing My Dress”