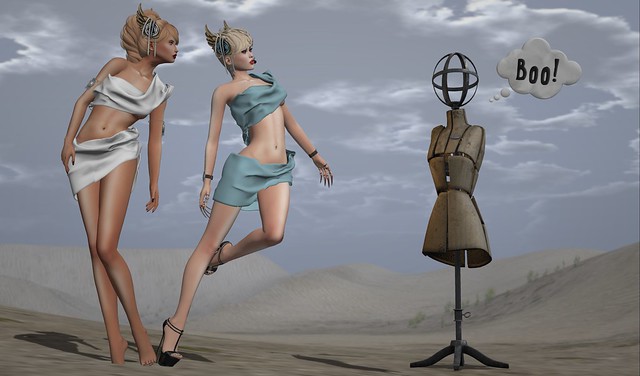 LYYLI – on the left – is wearing the following:

Caboodle – Large Winged Headpiece – Blue Rose … made by Ficceh Resident. The winged headpiece is available in four different colours (or as a FatPack) at the current round of The Fantasy Collective event, which is open from October 22nd until November 15th. NEW.
The Fantasy Collective

Lyyli et moi both used single person poses for this shoot, although as I had loaded them into a pose stand I was able to move us so that we stood next to each other. This does make it look as though we were using a two-person pose setup. The pose that Lyyli used is Di’s Opera – Editorial Series 5 – 3, while the pose that Alles used is Di’s Opera – Editorial Series 5 – 8. Both of these poses are made by Di Hoorenbeek and are available at her newly opened store in the Lovea region.
Di’s Opera