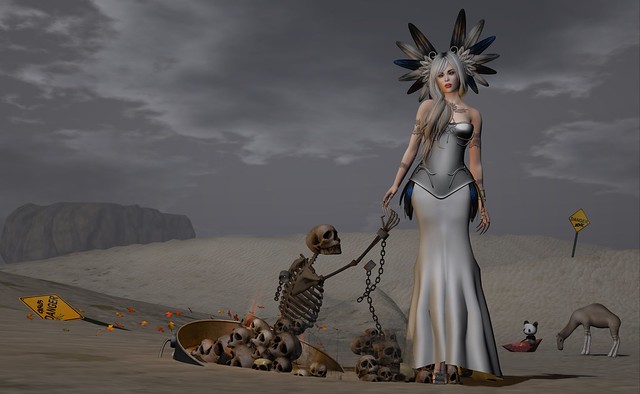 The September 2015 round of The Secret Affair closes in just a few days time and if you haven’t visited yet, please do make the time to go there. For me the two standout pieces from this event are the [E.V.E] Asgard Wings & Headpiece made by Noke Yuitza and the Valkyrja outfit from Poet’s Heart, which includes a striking headpiece as well as a corset and skirt. Both of these items are bound to give you a bit of the Viking spirit and will no doubt impress both friends and enemies alike!! 😀

PH – Valkyrja – Headpiece Silver … made by Irina Strazytski. This is part of the Valkyrja outfit and can be worn separately if you desire. Available now at the current Valhalla-themed round of The Secret Affair, which ends on September 30th. NEW.
The Secret Affair – Entrance Portal

AZOURY – Titane Shoe metal – (Maitreya) … made by Aniki Seetan. Available now at the Third Anniversary Round of the Cosmopolitan event, which is up and running, so to speak, from September 28th until October 11th. NEW.
Cosmopolitan

floorplan. danger sign … made by Tegan Serin. I have rezzed two copies in this scene.

:CP: Martha Dancing Autumn Leaves … made by Isla Gealach. Purchased at the current round of the No 21 event – open from September 21st until October 11th. NEW.
No. 21 Event

floorplan. fire pit tub … made by Tegan Serin. Purchased at the latest round of the Uber event, which is open from September 25th through until October 23rd. NEW.
Uber

Cursed Bride skirt back side … made by Precious Restless.

And lastly, the pose I used is KaTink – Andrea 8 … made by AnneMarit Jarvinen. NEW.
KaTink Poses & More