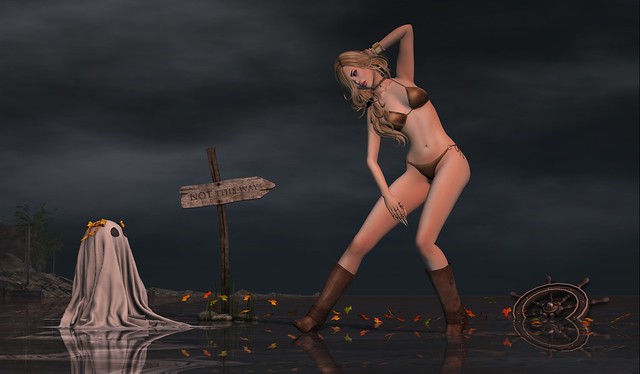 Well, if I can’t be a wonder of the Ancient World like the Colossus of Rhodes, then at least I can try to be the colossus of at least one SIM in Second Life. Perhaps?

I have mentioned that I am now blogging for the My Attic @ The Deck event, which is a ten-day sales event which happens every two months. And it’s a goodie too, as all items are priced at a mere 95 lindens which means that you can get great bargains here from well-known Second Life creators such as Cae, Cheeky Pea, EMO-tions, Elysium, Essenz, Label Motion, Lacuna, Lumae, Ma Vie Poses, Meva, Mimikri, NYU … and the list just goes on and on.

Anyway, in this post there is plenty of My Attic stuff on display and so these are my fashion details – from top to toe, so to speak.

.:EMO-tions:. * STEPHANIE 2* hair … made by Mirja Mills. I am wearing this hair in a tone from the Blonde pack. Available now in five colour packs at the September round of My Attic @ The Deck, which is open from September 21st through until September 30th. NEW.

:CP: Kitsch Little Lass Ghost – made by Isla Gealach. Purchased at the latest round of the Uber event, which is open from September 25th through until October 23rd. NEW.
Uber

07 – 8f8 – Storyteller’s Burrow – Direction Post … made by 8f8 Resident. This item is available now on The Story Teller’s Burrow machine at the September 2015 round of The Arcade Gacha but Alles purchased it at Gachaopolis (formerly The Pea). NEW.
Gachaopolis

:CP: Martha Dancing Autumn Leaves … made by Isla Gealach. Purchased at the current round of the No 21 event – open from September 21st until October 11th. NEW.
No. 21 Event

{Reverie} Shiny Shabby Gift – Ship’s Wheel Wall Décor … made by Paolla Flux. This is a free gift for members of the Shiny Shabby Events Updates group, which is available now at the current round of Shiny Shabby through until October 15th. NEW.
Shiny Shabby

And lastly, the pose I have used is Ma Vie – Inertia 04 m … made by Mavi Beck.
Ma Vie Poses