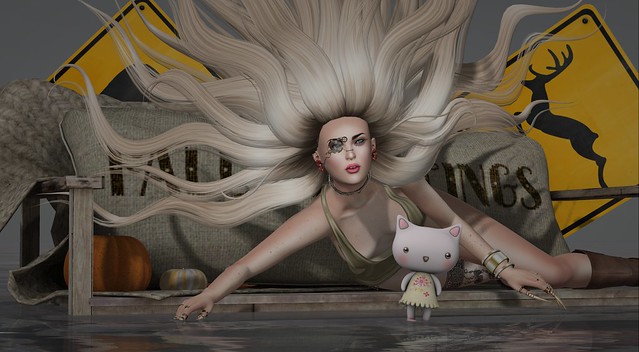 As if the sexy ever went out of one of nature’s most beautiful seasons – hehe!! 😀

Zaara : Morjim bikini bottom (maitreya) … made by Zaara Kohime.
This was gifted to me by a dear friend who was lucky enough to win two copies on the Zaara gacha machine at the June 2015 round of The Arcade Gacha.

floorplan. animal x-ing sign X 2 … made by Tegan Serin. I purchased these as a Fifty Linden Friday item on September 25th, 2015.

Ariskea[ Terre Automne ] Fall Greetings Bench RARE … made by Diaxm Resident. Purchased at the September round of The Arcade Gacha, which will be open until September 30th. NEW.
The Arcade Gacha