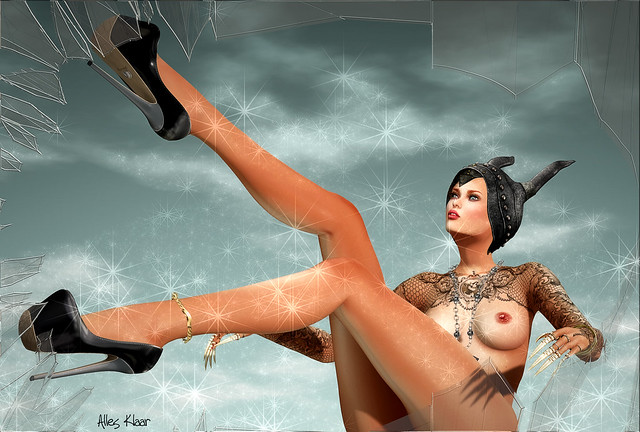 When the Emperor wore new clothes he went nude, so it only seems right that when Alles wore new shoes that she went nude as well – if only to show off her fabulous tattoo from White~Widow!! 😀

As for her ‘worn’ details, Alles is decked out in the following:

Lumae :: Niska – 5 – Amber // Petals skin with Ginger Brow & Freckles … made by Lumiya Rae. Available now at My Attic @ The Deck in eight different tones and with almost all known mesh head & body appliers, as well as default avatar wearability. The My Attic event is open from September 21st through until September 30th. NEW.
My Attic @ The Deck

[White~Widow] Invictus – Maitreya Mesh Body … made by Julie Hastings. Available now at the latest and just-started round of The Fantasy Collective, which is open from September 22nd until October 15th, although it may finish a couple of days earlier if last month’s event was any indication. NEW.
The Fantasy Collective

The pose that I have used is DM – Paranoia (less) … made by Del May. However this pose has been loaded into a pose stand and the pose stand was then tilted at almost 90 degrees, so that I was in a horizontal plane rather than crouching a bit whilst upright.