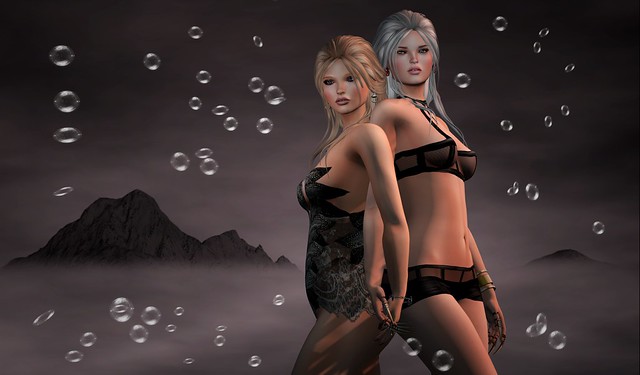 Firstly, I would like to thank my sweet friend Mischa for her infinite patience in putting up with crashy me when we made this picture. She’s an absolute gem!! 😀

And secondly, these are our fashion details.

MINA Hair – Elsa (materials) … made by Mina Nakamura. Mischa is wearing this in a tone from the Dark Blond pack. Available now at the current round of Shiny Shabby, which is open from September 20th until October 15th. NEW.
Shiny Shabby

MINA Hair – Elsa (materials) … made by Mina Nakamura. I am wearing this hair in a tone from the Grey pack. Available now at the current round of Shiny Shabby, which is open from September 20th until October 15th. NEW.
Shiny Shabby

Yvonne *Black* Maitreya Mesh Body Applier … made by YukaChoco Magic. This is the black lingerie that I am wearing. The chocolate.Atelier. lingerie – which is also available in red and white, and with fittings for classic avatars as well as appliers for four popular mesh bodies and Omega appliers – can be purchased right now at the GEN-Neutral event, which is open from September 12th until September 26th. NEW.
GEN-Neutral

The two-person pose we have used is !bang – thick as thieves.

One thought on “The Bubbly Ones at Sarawak”