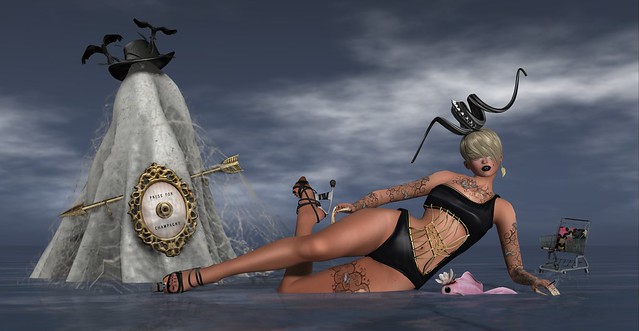 Well here I am – lying pretty in a summer of 2014 swimming costume from GizzA Creations, while a cute pink fish goes idling by!! It’s obviously a tough life for this Aussie blogger!! 😀

SpringSprangSprung headpiece … made by Zib Scaggs. Purchased in late August 2015 when Zibska was having a sale.

*+Crie Style+* Voglia(Platinum) … made by Grazioso Alekseev. It’s the gorgeous eye-wear that is sitting on the bridge of my nose. This was available as an exclusive at the Love Is In The Air event in February 2015.

*LODE* Headwear – Black Pitch with feathers [black] … made by Chirzaka Vlodovic. This is the “hat” that sits atop my little pile of props. I purchased this headwear at the September 2014 round of The Secret Affair.

DRD MM covered furniture hanger … made by Jaimy Hancroft. This item is available now on the DRD Mystery Mansion gacha machine at the just opened round of The Arcade Gacha but in order to save herself much angst and the spending of far too many lindens, Alles purchased it at Gachaopolis (formerly The Pea). NEW.
Gachaopolis

Kalopsia – Shopping Cart Chair … made by Isabeau Baragula. As this prop is both Copy and Modify, I reduced the size of it in Edit mode. Purchased as part of the Kalopsia – Trash Talk set at the July/August 2015 round of Uber. NEW.

And lastly, the pose that I used is oOo creature_two … made by Olaenka Chesnokov. However I tweaked this pose using my Animare HUD so that my right hand wasn’t poked into my thigh and then changed the position of my left leg.