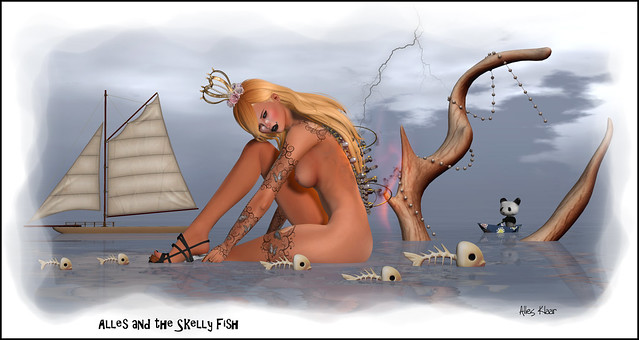 Way, way back in July 1985 a certain Gordon Sumner, better known to the rest of us as Sting, released a single called “I You Somebody, Set Them Free” – and while I’m not exactly in love with my skelly fish, I did think that it was nice to set them free!! 😀

enVOGUE HAIR – Renesmee Fitted hair … made by Casandra Rain. I am wearing the hair in a tone from the Dark Blondes tone HUD.
enVOGUE Hair

grim bros lighting bolts SPINE … made by Cutea Benelli. Purchased aeons ago in September 2011 but … still available inworld or on MarketPlace.
Lightning Bolts Spine on MarketPlace

AF Ralph’s Boat … made by Apple Fall (aka warehousefifteendesigns Resident). This cute object is Copy/Modify and was purchased on MarketPlace in March 2015 for a mere 125 lindens.

+Half-Deer+ Drift With Me – Driftwood Seat – Light … made by Halogen Magic. Purchased in August 2015 when Half-Deer had a very quick sale.

+Half-Deer+ Xiong Mao / Panda – I’m on a Boat! (Blue Origami) … made by Halogen Magic. Purchased in August 2015 when Half-Deer had a very quick sale.

+Half-Deer+ Skellyfish Balloon (wear) … made by Halogen Magic. However rather than wearing the prop I rezzed it and then used Edit mode to unlink the Skellyfish from the bag/balloon itself. And then cos they were Copy/Modify I placed five of the newly liberated Skellyfish in the water. Purchased in August 2015 when Half-Deer had a very quick sale.

And lastly, the pose that I used is KwK.poses -attitude- 010 … made by kiana Jarman. However I tweaked this pose using my Animare HUD so that my left thigh was at a horizontal angle and therefore parallel to the surface of the water.