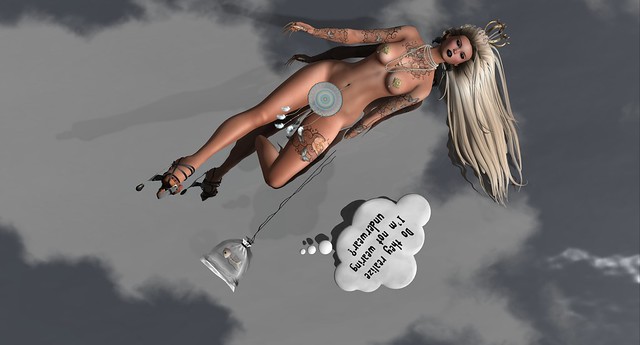 Tableau Vivant \\ Editorial \ Eastern wind … made by M4ri1yn Magic. I am wearing this hair in a tone from the Blonds HUD. This hair is one of the “common” prizes that Tableau Vivant will have at The Arcade Gacha beginning on September 1st. NEW.

Kalopsia – Dreamcatcher – Blue … made by Isabeau Baragula. This is actually a prop but I rezzed it in the scene so that it er, covered my nether regions and also matched the colour of my very beautiful tattoo!!

+Half-Deer+ Skellyfish Balloon … made by Halogen Magic. This item is meant to be worn but I rezzed it next to me so that it appeared as though I was holding it with my left hand. Purchased in August 2015 when Half-Deer had a very quick 50% off sale.

The pose that I used is Frozen – Leggy Pose 05 … made by Weronika Pobieski. However this pose was considerably modified by me, via the use of my Animare HUD as I changed the positions of both of my legs. Purchased as part of a Leggy Pose set at the Color Me Project event in mid-August 2015. NEW.