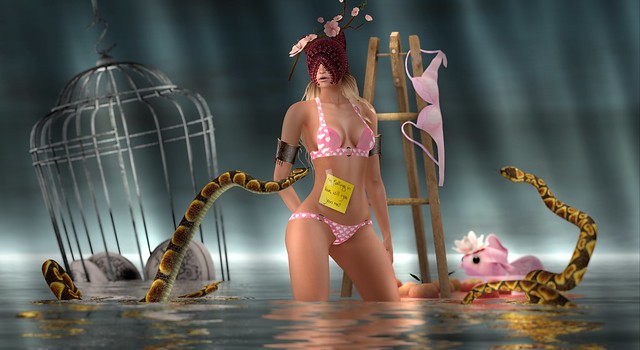 Snakes and Ladders is an ancient Indian board game regarded today as a worldwide classic. It is played between two or more players on a gameboard having numbered, gridded squares. A number of “ladders” and “snakes” are pictured on the board, each connecting two specific board squares. The object of the game is to navigate one’s game piece, according to die rolls, from the start (bottom square) to the finish (top square), helped or hindered by ladders and snakes respectively.

The game is a simple race contest based on sheer luck, and is popular with young children. The historic version had root in morality lessons, where a player’s progression up the board represented a life journey complicated by virtues (ladders) and vices (snakes).

Well, you learn something new every day as the saying goes. I had always imagined that Snakes and Ladders was an English pursuit after all playing both this game and scrabble were two things that I associate with dear English-born grandmother, who passed away many years ago.

As for the real purpose of this post, my worn details are as follows:

Moon. & [VALE KOER] Hair – Element … made by Silent Acoustic. I am wearing the hair in a tone from the Blondes HUD, while the mask itself can be tinted into five different colours. Purchased at the current round of the No 21 event which is open from August 21st through until September 11th. NEW.
(NB – total cost of this purchase was 275 lindens.)
No 21 Event

Madrid Solo- Whimsical Designs- Queen Day & Night- Lips Only … made by Madrid Solo. This is the tattoo on my lips. Purchased in August 2014.

Ursule Heart *Pink* Maitreya Mesh Body Applier bikini … made by YukaChoco Magic. The Ursule Heart bikini from chocolate.Atelier is available in five colours and each colour has appliers for seven different mesh fittings as well as being available in clothing layers for the default Second Life avatar. The bikini is available now at Creators Collection Box, which is open from August 22nd until September 12th. NEW.
Creators Collection Box

[ Lucky #7 ] Post-Me: Falling in love … made by Shortcake Sugarplum. Worn as an attachment to my Stomach. I purchased a complete set of Post-Me notes – which can either be rezzed or worn on your body – on Second Life MarketPlace.
Available here: Post Me Notes

06.[Sallie x Body Language] Undressed : Bra B … made by made by Sallie Takao. This was a gacha item at The Garden Gacha event, which finished on August 22nd. And yes, it’s draped over the top of the ladder. NEW.

The pose that I have used is Bauhaus Movement – Thalia H. Editorial Set 7 … made by LouLou Teichmann. Purchased at the July/August round of Shiny Shabby, which finished on August 15th. NEW.