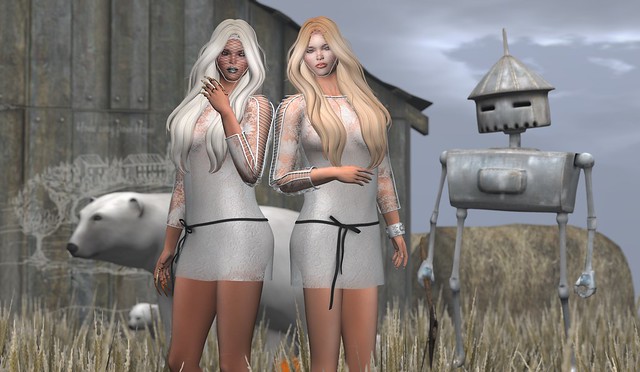 It’s always sad when a Second Life creator decides to pull up stumps, so to speak, on both their inworld and MarketPlace stores and send their much-loved creations into the abyss. Which was the case with Aurelia Chauveau’s MOLiCHiNO label just recently. Fortunately for fashion fans like moi, Aurelia gave us some advance notice of the impending closure, so I rushed like a mad thing to her store and bought as much as I could before the midnight hour of August 16th saw its end.

Then as a farewell tribute to MOLiCHiNO, I got together with my fellow Aussie bud, Mischa Moyet, to do a picture in the gorgeous Maggy dress.

Our worn details are as follows.
ALLES – on the left – is wearing:

[Entwined] Abella hair … made by VivienMarli Resident. I am wearing this hair in a platinum blonde tone from the Naturals HUD.
Entwined Mainstore

LaGyo_Maylea veil headpiece Silver … made by Gyorgyna Larnia. This was first available at the April 2014 round of Collabor88 (when I bought the black version) but I purchased the Silver version inworld in August 2015. Note – for the same price it was almost 18 months earlier.
LaGyo

no. 7 [ Cupcake Lipsticks ] Lelutka Head Applier – black sprinkles … made by Shortcake Sugarplum. The full range of Cupcake Lipsticks which features both tattoo layers and appliers for the LeLutka and TMP mesh heads is available at the current round of The Instruments which is open from August 18th until September 6th. NEW.
The Instruments

MISCHA – on the right – is wearing:

[Entwined] Abella hair … made by VivienMarli Resident. Mischa is wearing the hair in a tone from the Light Blondes HUD.
Entwined Mainstore

ISPACHI [CHERISHED MOMENTS] Polar Bears … made by Andred Qinan. This item was purchased at the December 2014 round of The Arcade Gacha.

*DC*_DisplayModel_The Tin Woodman … made by cocoro Lemon. Sadly this prop (aka ‘my husband’) is no longer available.

The two-person pose we used is KaTink – Rockin’ It … made by AnneMarit Jarvinen. NEW.
KaTink Poses & More