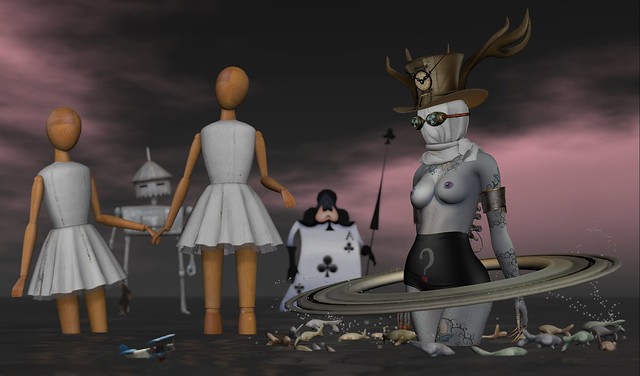 I decide to dress this picture up as some of “first encounter” between different alien races. On the right-hand side is Alles – face hidden, scaly skin (including purple nipples) and what appears to be the rings of the planet Saturn around her waist. And then you have this rather odd quartet of what may be aliens, or are they secret inhabitants of Planet Earth? I will leave you dear reader to decide. 😀

As for styling, these are the worn details for Alles:

* SORGO – Faceless Drape B (FITTED) … Purchased at the current round of The Men’s Department, which is open from August 5th until August 31st. NEW.
The Mens Department

LeLutka.Mesh Head-LOTTE v1.1 … made by JadenArt Resident.
LeLutka Head (with eyes) ALPHA … made by Nyx Linden.
I am mentioning these objects cos while my beautiful face isn’t visible, I didn’t have to remove my LeLutka head in order to wear the Faceless Drape. 😀

.{PSYCHO:Byts}. Apocalyptic Goggles – Eyes … made by psikotik Gothly. Purchased at The End event in July 2015. NEW.

Lumae :: Adore – Ianthe :: Seashells {DarkBrow} skin … made by Lumiya Rae. Purchased at the Enchantment event which is open from August 14th until September 4th. NEW.
Enchantment

Legal Insanity – Nathalie shorts ? S … made by DATRIP Blackbart. Purchased in August 2014 as part of a very smexy two-piece outfit at The Black Fashion Fair.

Card Soldier-Club … made by Precious Restless.

The pose I have used is KaTink – Leona 2 … made by Maliah Naidoo.