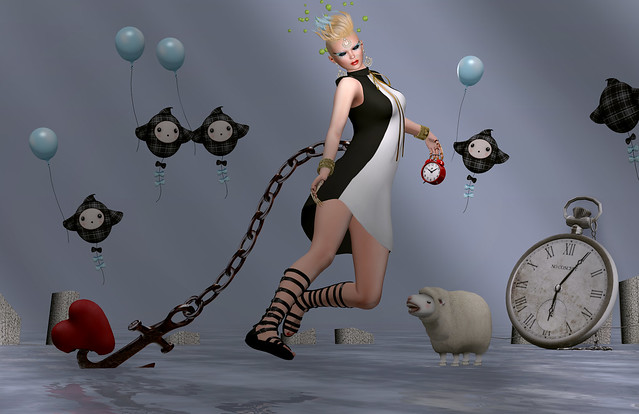 One of my favourite Second Life designers – riri Bazar – has a wonderful new dress in black & white (as well as other shades) available now at Flux Sur Mer.

And so, this is my fashion style:

Enceladus Orbit … made by Zib Scaggs. It’s the “green peas” that are floating around my head. This item is part of the Enceladus hair that I purchased recently at Hair Fair 2015. NEW.

MG – Tikka – Maharani … made by Maxi Gossamer.
Purchased as part of MG – Maharani – The Complete Collection at the May/June round of Uber.

[CX] Anchored Tail Silver **LIMITED** … made by Kamayari Resident. Purchased at the Project Limited event in July 2015. The nature of this event meant that every item there would only be available for the duration of the event, or until it had sold out at the event. NEW.

fri. – Pandora.Sandals (Coal) – Maitreya … made by Darling Monday. Purchased at the current round of Uber, which is open from July 25th through until August 23rd. NEW.
Uber

8f8 – Baby Black Kite (Rez me) – rotate – gift … made by 8f8 Resident. Acquired in April 2014. This prop is COPY but I only used two of them in making the picture as I merged layers with the kites in different positions. This product is a freebie and is still available at the 8f8 store on the Black Kite SIM.
8f8 Store

[NO CONCEPT] antique chronometer … made by arinco Resident. Purchased at KUSTOM9 in mid-July.

The pose that I used is DM – Sleeping sculpture … made by Del May. However I have my Del May poses loaded into a pose stand and then titled the pose stand so that it was at an angle of about 105 degrees. I then modified the pose further using my Animare HUD to alter the position of my right arm so that my hand was on my hip rather than away from my body.