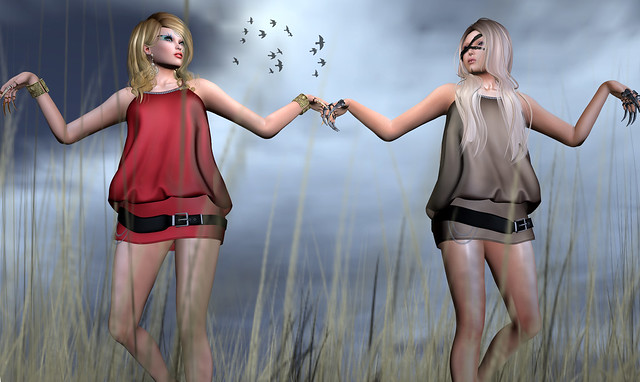 Cancer is a lousy, rotten disease which can cut people down at any time of their lives. It claimed the lives of both my father and grandfather when they were in their early fifties and in May of this year it claimed the life of a Second Life creator, Scarlet Chandrayaan. Now it is threatening the life of another young SL creative, Lexi Zelin, who at 28 years old and with a six-year-old daughter, deserves a better deal in life.

In order to help Heather (Lexi Zelin in Real Life), the Second Life community has banded together to do a shopping event to help and her family deal with the mounting medical bills that her treatment entails. This event is The Lexi Project, which is running from July 26th through until August 9th. One hundred per cent of the proceeds from the event will be donated to Lexi to help her financially. So it’s a damned good cause.

Anyway, after visiting the event I put out a call to a few friends inworld to see if they could do a quick picture featuring some of what was on sale and the lovely Mia responded. So while she got herself ready for work, I put us on pose stands and played about with props and Windlight in order to get a shot. And this picture is the result.

So, this is what us lovelies are wearing.

ALLES – on the left – has the following fashion style:

MINA Hair – Lizzy – Natural (materials) … made by Mina Nakamura. I am wearing the Lizzy hair in a dark blonde tone. This hair was available at the just concluded Hair Fair 2015, so it should be available instore very soon. NEW.
MINA Hair

MG – Tikka – Maharani … made by Maxi Gossamer.
Purchased as part of MG – Maharani – The Complete Collection at the May/June round of Uber.

SHEY – Avien Mini Dress M … made by Cuba Avedon. This dress is available at The Lexi Project for a mere 250 lindens and quite amazingly has a colour-change HUD which allows you to tint the dress in sixty different shades. It’s a fabulous bargain and the purchase is – as I have said before – in aid of a very worthy cause. NEW.
The Lexi Project

MIA – on the right – has this fashion style:

The poses that we used are from an Annomis poses-Lexi set … made by Annomis DeVaux. These are available as a set for 50 lindens at The Lexi Project event. NEW.
The Lexi Project