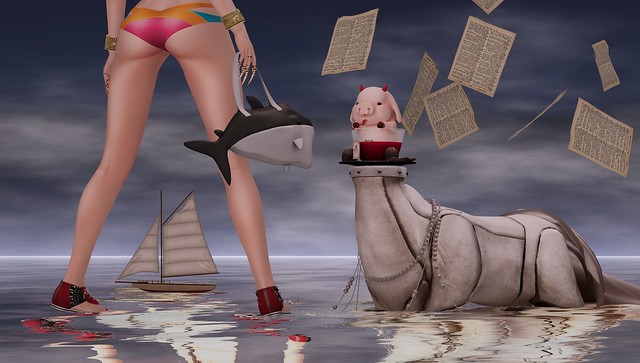 This little piggy has been rude to me once too often so it has come to this – a showdown between Sinful Bacon and Alles, in which he’s armed merely with chocolate biscuits and I have my trusty shark handbag by my side. Now, I wonder who will win?

erratic / beth – bikini top / hotpink (maitreya) … made by Erratic Rain. (Not Seen.)
erratic / beth – bikini bottom / hotpink (maitreya) … made by Erratic Rain.
This fabulous bikini is available now at the current round of Uber, which is open from July 25th through until August 23rd. I should point out that this bikini is only available as a fitting for the Maitreya Lara mesh body. NEW.
Uber

[tea.s] Shark Bait Bag – Black (Hold) … made by Tea Soup. This was purchased at Summerfest ’14 but sadly this bag appears to be no longer available.

Pure Poison – Zoe Thong Sneakers – Maitreya … made by Shaleene Kenin. Available now at the current round of Uber, which is open from July 25th through until August 23rd. NEW.
Uber

AF Ralph’s Boat … made by Apple Fall (aka warehousefifteendesigns Resident). This cute object is Copy/Modify and I purchased it on MarketPlace in March 2015 for 125 lindens. Modified here to be smaller than its default size – so it could sail between my legs!! 😀

{anc} mannequin. MermaidPrincess(Adult)6Li RARE … made by aki69 Resident. Yes, it’s the shiny body under Sinful Bacon’s teacup. Purchased at the February 2015 round of the Fantasy Gacha Carnival, it is now available on an instore gacha.

And lastly, the pose that I used is MorPhinE – Express yourself … Set.1.9 … made by Hadaluna Daines. This pose was purchased as part of an Express Yourself set in February 2013.