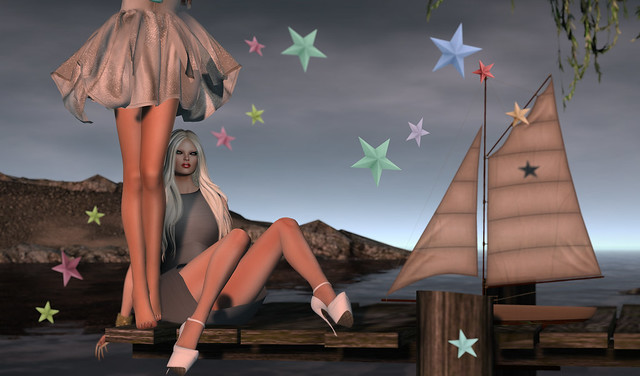 Many thanks to my friend Mischa – and her legs especially – for her devotion to this photo-shoot at Baby’s Ear and for staying logged on so I could finally get the angles right and make sure that the camera wasn’t er, looking at my crotch!! 😀

MISCHA – on the left – or what you can see of her … is wearing the following:

ALLES – seated on the right – is wearing the following:

Tableau Vivant \\ Whispers hair [S] … made by M4ri1yn Magic. Available now at the current round of The Fantasy Collective, which is open from July 22nd until August 15th. NEW.

MG – Earring – Maharani – L … made by Maxi Gossamer.
Purchased as part of MG – Maharani – The Complete Collection at the May/June round of Uber.

BENDER KYO Mini Dress Silver XS … made by Honey Bender. This was available at Event @ 1st, which completed its most recent round on July 25th. NEW.

duboo.space wanderer … made by Newreem Waffle. Modified by me using Unlink in Edit mode, so that only the large stars were present. Purchased at the Designers United 5 event in September 2013.

AF Ralph’s Boat … made by Apple Fall (aka warehousefifteendesigns Resident). This cute object is Copy/Modify and I purchased it on MarketPlace in March 2015 for 125 lindens. Modified here to be taller than its default size – so that it would be more noticeable on the deck. 😀

The two person pose that we used is an lar [poses] Nevada … made by Katya Valeska. Purchased at The Liaison Collaborative event in September 2014.