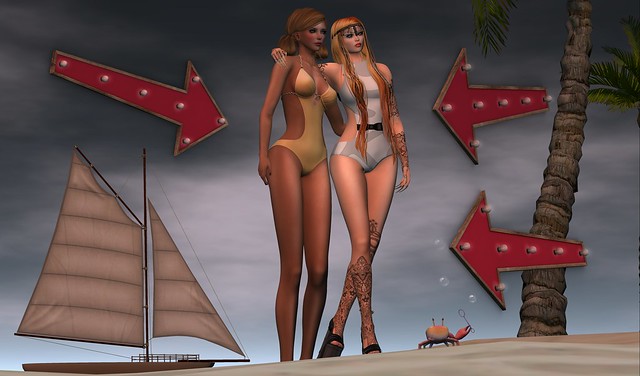 Sharks aren’t the brightest animals on the planet, so it’s only fair that they be given “pointers” as to where, or even what their next meal might be. Don’t you agree?

Many thanks to Julie for letting me shoot this image at her home SIM in the sky. We both decided that a beach theme would be rather cool, even though it’s not quite swimsuit weather where I am at the moment!! 😀

JULIE – on the left – is wearing the following:

Lucretia #4 XS Swimsuit … made by Kiddo Oh (Dead Dollz). Purchased at the Wayward Carnival, which is open from July 15th until July 30th. NEW.
Wayward Carnival

.Things.- Fehu Tattoo … made by Nheria Resident. I am wearing the Fresh variant via an Omega Applier. Purchased at the Wayward Carnival event, which is open from July 15th until July 30th. NEW.
Wayward Carnival

AZOURY – Epiphany C (Maitreya) RARE shoes … made by Aniki Seetan. This is a gacha item at The Epiphany event, which is open from July 16th until August 4th. NEW.
The Epiphany

AF Ralph’s Boat … made by Apple Fall (aka warehousefifteendesigns Resident). This cute object is Copy/Modify and I purchased it on MarketPlace in March 2015 for 125 lindens. Modified here to be larger than its default size … so Skippy could see it clearly. 😀

floorplan. arrow marquee x 3 … made by Tegan Serin. Purchased in July 2015 cos floorplan are, or were having a 50% off sale. It finishes at midnight on July 19th.

+Half-Deer+ Bubble Brigade Crab – Rainbow – Less Bubbles … made by Halogen Magic. Purchased at the June 2015 round of Collabor88. NEW.

The two-person pose that Julie and I used is KaTink – We Did It Together … made by AnneMarit Jarvinen. NEW.