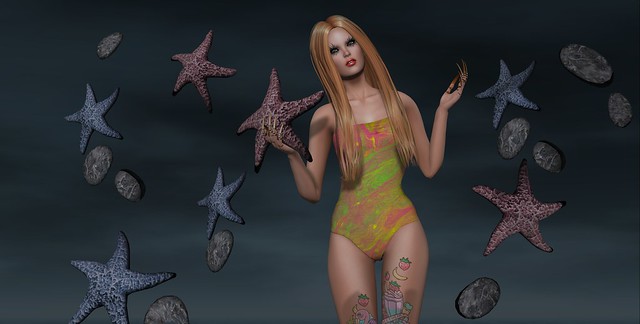 July is a big month for events in Second Life, what with Hair Fair, Candy Fair, Wizarding Faire and Project Limited as well as the usual gamut of shopathons all happening at the same time. And just like any other shopaholic, Alles has been burning her lindens at almost every hour of the day in the quest for digital goodies.

In this picture Alles is decked out in the following gear:

Tableau Vivant \\ Ten hair (L) – F … made by M4ri1yn Magic. I am wearing one of the Redheads tones of this hair. Available now at Hair Fair 2015, which is open until July 26th. NEW.
Hair Fair – Blonde

Maitreya Mesh Body Lara – Shape 4 … made by Onyx LeShelle. Modified by me to make my breasts and butt a tad smaller.

:…Deche…: Sugee Swimsuit XS … made by Ivyana Szondi. Available now at the July round of Event @ 1st, which began on July 1st and finishes on July 25th. NEW.
Event @ 1st

antielle. Delicious Summer (Vintage) tattoo … made by Kaorinette Resident. Purchased at the current round of The Seasons Story, which is open from July 10th until July 30th. NEW.
The Seasons Story

The pose that I have used is [X] Akane 1 … made by Xerys Resident. Available now at July round of Event @ 1st, which began on July 1st and finishes on July 25th. NEW.
Event @ 1st