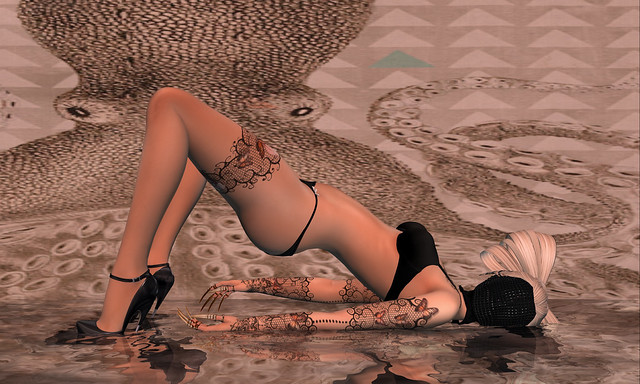 Tegan Serin from floorplan, was one of the major creative forces behind this year’s Summerfest event, which sadly has just finished in Second Life. Amongst the various items that she created for the event were an octopus wall hanging and an octopus throw rug – which I have used in this picture, albeit as a backdrop and not as something that you would otherwise walk all over! 😀

As for my worn items, Alles is decked out in the following:

[sYs] MICHA hair (unrigged mesh) … made by Systi Cisse. I am wearing this in a tone from the Blonde HUD. Purchased at Hair Fair 2015. NEW.
Hair Fair – Redhead

[VALE KOER] HAUTE COUTURE MASK BEEZY … made by Bob Resident. Purchased at Project Limited which opened on July 11th. The nature of this event means that every item there will only be available until it has sold out. NEW.
Only 150 copies of each version of the Vale Koer mask will be sold.
Project Limited

The prop that I used in the picture is:

floorplan. throw rug / octopus … made by Tegan Serin. This was purchased at Summerfest ’15, which finished its days in the sun on July 12th. NEW.

The pose that I used is CORPUS – Lounge Serie 009 … made by Diconay Boa. This was purchased as part of the Lounge Series set at May 2015 round of Event @ 1st.