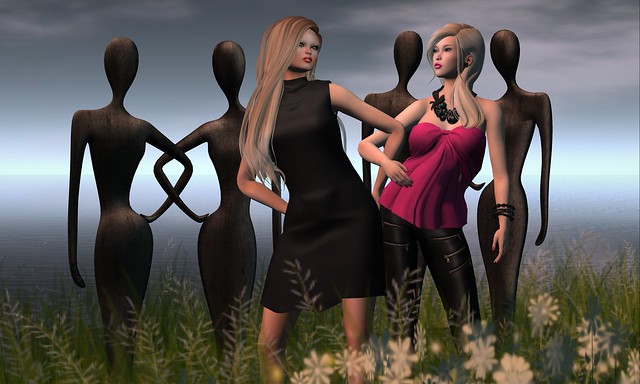 My friend Jasmine Ballinger has her own fashion blog from Second Life called “Usually Blonde” and you can find it here … https://usuallyblonde.wordpress.com/

However it has been a long time since Jasmine posted to her blog and a long time since I had even seen her in Second Life, so I was pleasantly surprised to see her online on my Sunday evening (well ours actually, as we both live in the same time zone). I do hope that she will be making more visits to Second Life in the immediate future and that her blog gets a taste of her updated fashion style.

We made this picture at Hydra Isles (aka Umbral Photography) and our worn details are as follows:

ALLES – the blonde on the left – is wearing the following:

.~Tableau Vivant~ Marea hair (L) … made by M4ri1yn Magic. I am wearing one of the Shadows tones of this hair. Available now at the current round of Collabor88, which is open from July 8th until August 6th. NEW.
Collabor88

LPdN: Sonya Dress:Black XS … made by marcopol Oh. Purchased at the current round of Shiny Shabby which finishes on July 15th. NEW.
Shiny Shabby

JASMINE – the blonde on the right – is wearing the following:

The props that I used are two sets of joined mannequins. I linked them in Edit mode.
*LODE* Deco – Fashion Silhouette [wood] … made by Chirzaka Vlodovic.

The two-person pose that Jasmine and I used is KaTink – Armed and Beautiful … made by AnneMarit Jarvinen.