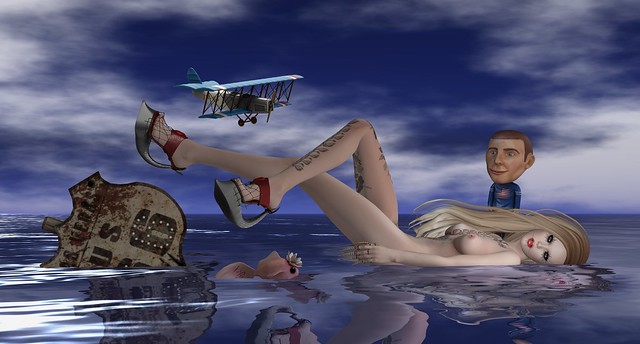 Well I’m not really afraid of the world and it’s only certain Americans who scare me but I was playing David Bowie when I was making this picture and that’s my reference point, of course!!

I took this picture in the Athan SIM (rezz allowed but with five minute auto-return) and lay down in the refreshing cool waters with the Bobblehead for company.

.~Tableau Vivant~ Marea hair (L) … made by M4ri1yn Magic. I am wearing one of the Shadows tones of this hair. Available now at the just opened round of Collabor88, which is open from July 8th until August 6th. NEW.
Collabor88

[sYs] TATTOO – Pollen – Maitreya Body Applier … made by Systi Cisse. Purchased at current round of The Chapter Four, which is open from July 4th until July 25th. NEW.

AZOURY – Naiade – Red (Maitreya) shoes … made by Aniki Seetan. Available now at the just opened round of Collabor88, which is open from July 8th until August 6th. NEW.
Collabor88

The pose I used is {NanTra} If the Shoe Fits 2 … made by Nancoix Urquan. Adjusted by me using my Animare HUD.