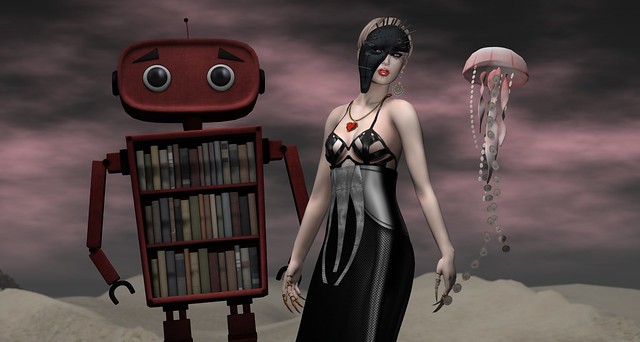 Well, I did do my best to make one of the Wastelands SIMs look like the badlands of Mars by tinting the sky kinda pink!! 😀

So in this picture Alles is torn between two lovers – a bookish robot and a very cute jellyfish, who she seems to be making eyes at. But who will win the affections of sweet Alles? Or will she choose both of them perhaps and live in a shock-horror, cross-species ménage à trois ?

As for her worn details, frisky Alles is wearing the following:

.HW. Bhaltair – Mask (Cross) … made by deannanastie13 Resident. Originally purchased at the CarnEvil event in December 2014, the two versions of the Bhaltair Mask are now available at the HollyWeird store inworld.
.HollyWeird.

Lybra & h.m.a.e.m – Love letters from mars skirt S … made by riri Bazar. Available now at July round of Event @ 1st, which began on July 1st and finishes on July 25th. NEW.
Event @ 1st

Alouette – Dewey The Robot – Red … made by the late Scarlet Chandrayaan. Purchased at the September 2014 round of The Liaison Collaborative.

+Half-Deer+ Jewel Jellybell – Grapefruit (wear or rez) … made by Halogen Magic.
The Jewel Jellybell collection is available at the current round of Collabor88, which finishes on July 7th. NEW.
Collabor88

The pose that I used is KaTink – Houston St 1 … made by AnneMarit Jarvinen.