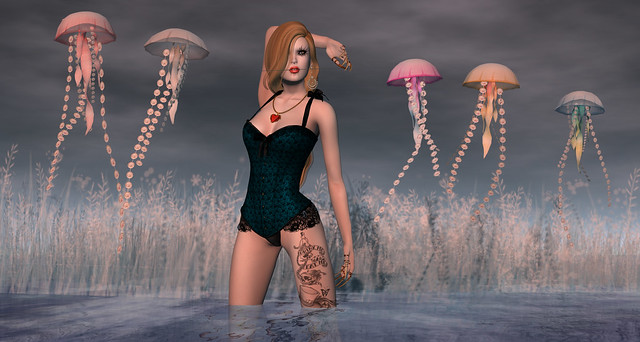 Want to know some fun facts about jellfish? Well for starters they’re not fish at all but an invertebrate species which are the major non-polyp form of individuals of the phylum Cnidaria. They are typified as free-swimming marine animals consisting of a gelatinous umbrella-shaped bell and trailing tentacles. And like many politicians we know only too well, they are boneless, brainless, heartless and completely transparent. Touche!

But in Second Life where their stinging tentacles can’t hurt us, they can make cute and colourful pets – or even photo-props if that is your desire!! 😀

In this aquarium-inspired picture, Alles is wearing the following:

[Entwined] Nymeria hair … made by VivienMarli Resident. I am wearing this hair in a tone form the Naturals B pack. Purchased at the June 2015 round of We Love Role-Play, which finished on June 30th. NEW.

{POSH PIXELS} Coming Up Roses Corset – XS … made by VampirePam Resident. Available now at the current round of Event @ 1st, which began on July 1st and finishes on July 25th. NEW.
Event @ 1st

*aG* Froezn Meadow … made by Alir Flow of alirium. It’s the grasses in the background.

The pose that I used is KaTink – Alexxa 2 … made by Maliah Naidoo.

2 thoughts on “Jellyfish Are Go”