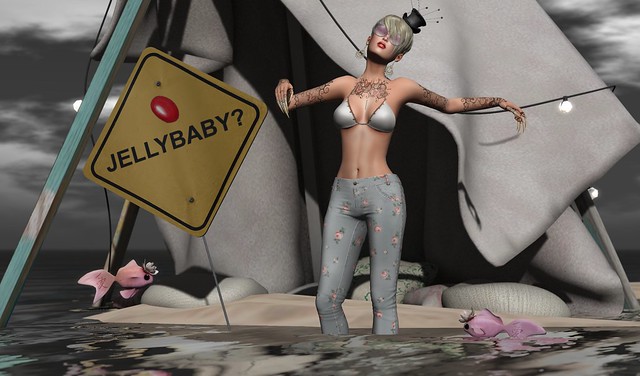 In this post Alles nods her head in the direction of Blondie with the title and to all things summery with her attire!! 😀

[White~Widow] Music Box – Pink – Maitreya Mesh Body … made by Julie Hastings. Available at the July 2015 round of Event @ 1st which is open from July 1st until July 25th. NEW.
Event @ 1st

Zaara : Morjim bikini top (maitreya) … made by Zaara Kohime.
This was gifted to me by a dear friend who was lucky enough to win two copies on the Zaara gacha machine at the June 2015 round of The Arcade Gacha. NEW.

Ariskea [ Porcelain] Beach Calm tent … purchased from a gacha re-seller. This item is available at the current (June 2015) round of The Arcade Gacha. NEW.

Sand Sculpty … made by AvelLuna Resident. Purchased on Second Life MarketPlace in March 2015 for a mere 20 lindens. (It’s the tiny beach behind me!)

!WorN? Jellybaby – Dr Who Warning Signs … made by Further Monday. Purchased on MarketPlace in December 2014.

The pose that I have used is Lybra – Special poses sale 198 … made by Natzuka Miliandrovic. Purchased in May 2015.